Normal Testosterone for Men in their Fifties

Home » Blog » Normal Testosterone for Men in their Fifties

As middle age approaches, you may feel that your “get up and go has got up and left,” but the source of your symptoms may be more than just aging. Without a blood test, the symptoms of low testosterone are virtually indistinguishable from the natural products of aging. The misinterpretation of low T symptoms causes this condition to go overlooked by some physicians, even though an estimated 20 percent of men over 60 have low levels.

How Does Testosterone Work?

Testosterone synthesis is a complex process that’s regulated by many different biochemicals, organs, and areas of the brain. Leydig cells found in the testes are males’ primary means for testosterone production, adrenal glands also make T but only account for a small percentage of that which is produced.

Follicle-stimulating hormone (FSH) controls the formation of T-producing Leydig cells and is made by a tiny gland in our brain called the hypothalamus. The adrenal glands, located above the kidneys, work in tandem with the hypothalamus to create luteinizing hormone (LH). Through enzymic activity, LH encourages the conversion of cholesterol into the anabolic steroid prednisone, which is then transformed into T by the Leydig cells.

T synthesis requires a delicate balance between the release and suppression of LH, FSH, and GrH to ensure T is in a healthy range. When androgen levels are low, the hypothalamus and pituitary glands secrete more of these hormones and inhibit their release of these when levels become too high.

T molecules bind to androgen receptors where our DNA acts as a map to assert changes within our body in a process called gene expression. Androgen receptors are found in many places throughout our body but are especially prevalent in our skin, muscle, and stomach lining.

In men with hypogonadism, these body systems can’t keep up with the demand for testosterone. This deficiency often presents itself through sexual symptoms like diminished desire, fewer morning erections, and erectile dysfunction.

Testosterone Levels As We Age 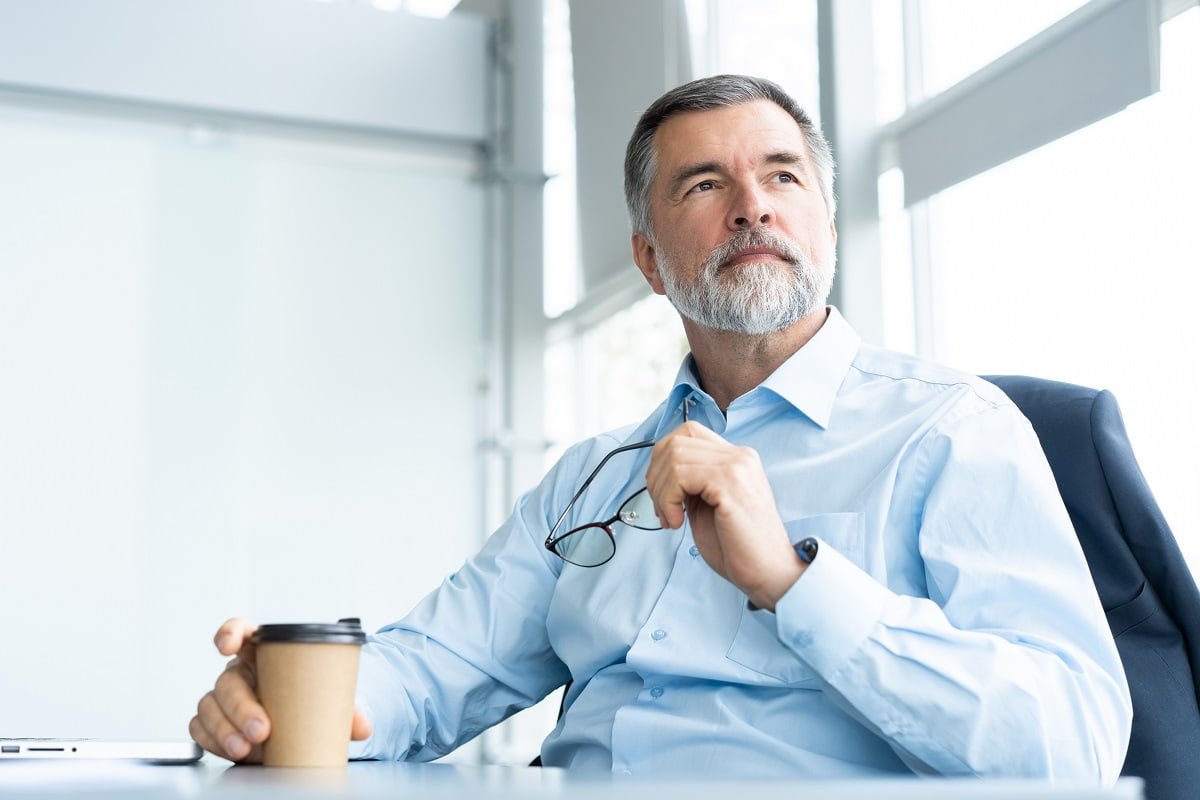 T production begins in utero and continues for the entirety of a man’s life. Even though we only produce a small amount during fetal development, T is essential for growth and brain health in both male and female babies.

Testosterone is responsible for maturation and growth in males throughout adolescence, triggering a significant growth spurt around seven years old and the onset of puberty around twelve. The uptick in T levels during puberty has a profound effect on the bones, causing the marrow to ramp up red blood cell production, and increasing calcium deposits to facilitate bone growth.

Levels are highest from age 17 to 20 and production stays at a fairly consistent pace until about age 30, after which levels of total T begin to drop just over 1% every year. The active form (bioavailable testosterone) falls at a steeper rate, declining about 2-3% each year. A 1-3% decline doesn’t sound like much, but it certainly adds up over time.

Age and T levels have a complicated relationship. While it’s true that levels decline as we get older, aging isn’t a sole cause of hypogonadism. Genetics, testosterone-inhibiting medications, poor lifestyle choices, and certain health conditions increase the risk of low T far more than hitting middle age. Eating a balanced diet, avoiding drugs and tobacco, and controlling your weight may help to keep testosterone production consistent, but for some, these preventive measures aren’t enough.

Failure of the testes or hypothalamic-pituitary-axis (or a combination of the two) are the most common reasons for late-onset hypogonadism. In testicular failure (primary hypogonadism), testosterone-producing Leydig cells become less responsive to the hormones that trigger T production and secretion.

Human and animal studies suggest that our bodies make fewer Leydig cells as we get older. There isn’t a clear explanation for this, but some experts speculate that age-related changes in testicular tissue are responsible for the decline.

It’s believed that most cases of secondary hypogonadism are the result of the hypothalamus becoming less sensitive to gonadotrophic stimuli. The decreased sensitivity causes a reduction of LH secretions, which in return minimizes testosterone output. Research findings suggest that gonadotropin-releasing hormones become less effective with age, which can also contribute to secondary hypogonadism.

Testosterone for Men in Their Fifties

The ideal range for T levels is 400-600 nanograms per deciliter, and most doctors classify levels below 300 ng/dL to be indicatory of low T. The average level of total testosterone for men from in their early 50’s is 606 ng/DL, but this number falls an average 44 nanograms by age 65.

Even though T production isn’t exactly optimal at middle age, it’s no less important for physical and mental health. The International Journal of Andrology explains that low T “may result in significant detriment in the quality of life and adversely affect the function of multiple organ systems.” Androgen deficiency has been linked to a broad spectrum of conditions, including Alzheimer’s disease, heart disease, type-2 diabetes, metabolic disorder, mood disorders, and obesity.

Sadness and a loss of interest in things they once enjoyed are common complaints of patients with low T, but for some men, these lowly feelings can turn into full-scale depression. A study of 200 men with below-average levels, found that 56 percent had symptoms of depression–9 times higher than the national average for men.

High body fat is one of the most common and misunderstood symptoms of low T in middle-aged males. The relationship between these two factors is a bit like the “chicken and the egg” scenario since high BMI lowers T and low T tends to raise BMI. Unhealthy levels of body fat increase risk factors for things like type 2 diabetes, obesity, high cholesterol, and heart disease.

Problems with bone health can be caused or exacerbated by low T, particularly in men over 50. The National Institue of Health explains that low T is a leading cause of secondary osteoporosis since low T can cause the body to reabsorb the calcium that makes up our bones.

How Hormone Replacement Therapy Can Help

The idea of undergoing hormone replacement can be a scary thought for some men, but there’s compelling research regarding its benefits and popularity. According to a survey published by the National Insitute of Health, 70 percent of the total study group were satisfied with the results from TRT, and those rates rose another 3% in patients given injectable testosterone.

In the aforementioned satisfaction study, patients reported significant improvements in overall mood and mental clarity as well as an increase in libido. A double-blind, placebo-controlled study by the Veterans Association, found that TRT improved depressive symptoms in men diagnosed with both low T and minor depression.

A three-month controlled study found topical gels particularly useful for the treatment of erectile dysfunction and low libido. Study participants also described an increase in sexual satisfaction during treatment. Another survey of the sexual effects of testosterone injections echoed these findings, stating “increased self-reported interest in sex during testosterone treatment, but not with placebo.”

Testosterone is just as much a metabolic hormone as it is an androgen. While the mechanism of action isn’t entirely understood, we do know that T is involved in how our body processes macronutrients. Many studies on the effects of TRT on body composition have yielded positive results for men with high BMI.

According to the National Institute of Health, “testosterone replacement therapy improves insulin resistance and also reduces body fat mass, in particular, truncal adiposity (belly fat), cholesterol and triglycerides.” A long-term study of 273 of overweight men on TRT found that “over 10 years, the testosterone-treated men lost 20.3 percent of their baseline weight; (and) their waist circumference dropped by 12.5 cm.” In a shorter 5-year study, men given TRT lost an average of 36 lbs during treatment, with no structured diet or exercise plan.

Testosterone’s cholesterol-lowering properties reduce risk factors for stroke, as well as heart disease, which is the leading cause of death for men over 50. TRT may also work as a vasodilator for some men, improving circulation and correcting some forms of erectile dysfunction. Other studies have found that short-term treatment with testosterone can regenerate damaged vascular tissue caused by plaque buildup.

Renew Vitality is a network of hormone therapy centers specializing in late-onset testosterone and growth hormone deficiencies. Our goal is to help men reclaim their health by providing quality care, cutting-edge therapies, and lifestyle counseling. If you would like to learn more about our treatment options, then please schedule a consultation at one of our nationwide facilities.