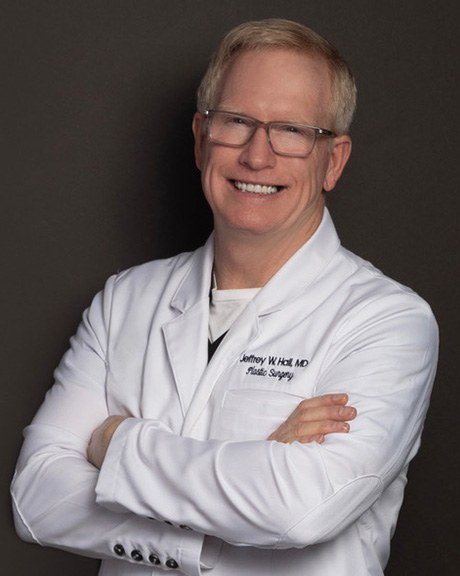 Dr. Hall is a native Texan who has a passion for helping others which led him to pursue a career in medicine, specifically becoming a surgeon. He decided to become a plastic surgeon after witnessing the benefits to patients in reconstruction and cosmetic surgery.

After completing his residency in plastic surgery, Dr. Jeffrey W. Hall opened his practice in Austin, TX in 1995. Subsequently, in 2007, he partnered with his wife to create their present practice in the Westlake area. He obtained his board certification in Plastic Surgery in 1997 and is a member in good standing of the American Society of Plastic Surgeons. Previously, he has served as the Chief of Plastic Surgery. In addition to these achievements, Dr. Hall has practiced in most of the hospitals in the Austin area and remains on staff as well. Dr. Jeffrey Hall began his practice as a General Plastic Surgeon performing all facets of plastic surgery including hand surgery, reconstructive surgery for cancer and trauma-related injuries, complex wound care, microsurgery, pediatric plastic surgery, and cosmetic surgery. Over the years, his practice has evolved into a cosmetic surgery practice, where he performs the majority of his surgery in his Joint Commission accredited private operating room.

Giving back to the community and to others is important to Dr. Hall. Shortly after arriving in Austin, he joined Austin Smiles as a volunteer surgeon and later served as a board member. He has participated in many medical missions in Central America, Vietnam, and Cuba where he performed cleft lip palate surgery.

Jeffrey W. Hall, M.D. continues to help others but now with a focus on Testosterone treatments with Renew Vitality. At hand he is assisting men who experience age-related symptoms by creating and facilitating individualized testosterone treatment plans. Dr. Hall believes in treating each patient as an individual and committing the time and effort to do what is best for them. He feels that it is an honor when a patient chooses him to be their physician and that the relationship is more than a procedure.